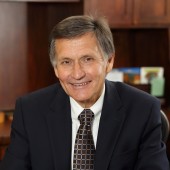 Prior to Reach Beyond, Wayne served as vice president for Radio at Moody in Chicago, with 35 owned and operated stations, reaching 1 Million listeners each week, plus 800 radio outlets nationwide.  WMBI AM FM in Chicago is flagship station to the Moody Network.

Wayne spent most of his ministry career at Northwestern Radio in Minneapolis: From 1997-2002 as executive vice president for radio; executive director of SkyLight Network from 1994-1997 and manager of KTIS AM-FM from 1980-1994.

Wayne was involved in leadership of National Religious Broadcasters as board secretary, chairman of the board, and ultimately NRB president of this 1600 member association.

Wayne served for two years as president/COO of Mission America Coalition, based in Palm Desert, CA, a coalition of 500 ministries and denominations focused on evangelism.

Wayne worked part-time from 2002-2005 as consultant and later executive director of Christian Music Broadcasters, an association of Christian radio stations dedicated to improving and quality and visibility of music-formatted radio stations.

He also served as Special Assistant to the President at Bethel College and Seminary in St. Paul, MN as coordinator of a $13M capital campaign.

Wayne has worked as media consultant, helping media ministries with their mission statement, strategic planning, goal setting, leadership/staff relationships, promotion, programming and fundraising.  He’s a writer, speaker and air personality for a number of organizations. He was awarded University of Minnesota Alumni ofAchievement in 2011.

Growing up on a dairy farm in northwestern Minnesota, Wayne learned to work hard, love the outdoors and to seek God in everyday life.  He received his call to ministry in high school.  God’s calling is to make the Gospel clear to good people who need a personal relationship with God through Jesus.  Wayne’s preparation to ministry took him through the University of Minnesota and the Free Lutheran Theological Seminary in Minneapolis.

Wayne lives in Colorado.  His wife Norma recently went to be with Jesus in April 2014. He’s a runner and a music lover. He has two daughters, Christy and Michelle and 9 grandchildren, all in Minnesota.