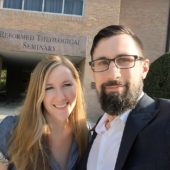 Dr. Matthew Everhard is the Senior Pastor of Faith Evangelical Presbyterian Church in Brooksville, Florida. He is the author of several books including his 2018 work, which reached #1 on Amazon in Historical Theology on the day of its release in April, 2018. He is also the author of the 2012 work, . Matthew has also written some popular level devotional e-books including Unknown: The Extraordinary Influence of Ordinary Christians.

Native Ohioans from the rustbelt of Akron, he and his lovely wife Kelly have three children, Soriah (an aspiring artist and writer) and Elijah (an aspiring Olympic wrestler), and Simone (likely an aspiring lawyer since she talks so much!).

Matthew and Kelly met and fell in love during a mission trip in 1998 where they rode in the same van together for a number of hours. Their first date was a walk along Chicago’s Navy Pier, chaperoned awkwardly by Kelly’s younger sister. Eight months later, Matthew “courageously” proposed to Kelly just a week prior to his leaving the country for a six-month mission trip to Africa! In April of 2000, she married him anyway. It has been wonderful ever since.

Besides preaching, teaching, and writing, Matthew enjoys riding bikes with the family and playing in the backyard with the children. He coaches youth folkstyle and freestyle wrestling, reviews and collects Bibles for Cambridge and Crossway, and drinks his coffee jet black.

Dr. Everhard is a graduate Reformed Theological Seminary (Orlando, FL), Ashland Theological Seminary (Ashland, Ohio) and Malone University (Canton, Ohio). His doctoral dissertation at RTS was supervised by Dr. Michael Allen. During his course of study at ATS Matthew concentrated in the field of Spiritual Formation with a minor in Bible. As an undergraduate at Malone, Matthew majored in Bible and Theology, with a concentration in Greek.

He is also an avid reader and enjoys works on church history, especially the Reformation and the Puritans. Enjoying writers both living and dead, Matthew surrounds himself with the comfort and counsel of John Calvin, Jonathan Edwards, R.C. Sproul, and John Piper among others.

His greatest passion and supreme treasure, however, is the Lord Jesus Christ who captured his heart in 1990 and has not let go since.

Preaching Lab! How many points should a sermon have? Video here: ▶️https://t.co/ebmqyMUA6j https://t.co/MM9RdE48go

Helpful explanation for those still unclear about the motives behind the Capital Protest. https://t.co/ENfdyo42Ek