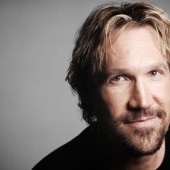 David A.R. White is a storyteller by nature. While he tells many stories through his acting, producing and filmmaking, a greater story encompasses them all: the calling of God on each of our lives.

David has been building his career in the film industry for more than 20 years, and in doing so he has learned a few things about following a God-given dream.

Though he has many credits to his name, David’s career hit new heights in 2014 with the release of his film God’s Not Dead, in which he also starred and produced. It became one of the most successful independent faith-based film of all time.

David was raised in a small Mennonite farming town outside of Dodge City, Kansas. At the age of 19, he moved to Los Angeles to begin what would quickly become a successful career as an actor, writer, director, and producer. He has produced over 40 films and starred in over 25 feature films, including  God’s Not Dead, God’s Not Dead 2, Mercy Streets, Six…The Mark Unleashed, Revelation Road 1, 2, & 3.

Never one to slow his pace, he’s also now actively in production on several projects, including a sitcom currently in production called Hitting the Breaks, which stars special guests like Rob Schneider, Tim Tebow and Morgan Fairchild. He also regularly produces video shorts for several web series, titled Life in the White House and On the White Track.

David’s first book, Between Heaven and Hollywood: Chasing Your God-Given Dreams (Zondervan, Oct. 2016) will give audiences a more complete, wide-reaching picture of how God has worked through his life in his pursuit of filmmaking and acting. For David, the dreams God gives a person are the highest callings one can receive, and in the book he explores how following the Lord and your dreams simultaneously is not only possible but can also be a powerful agent for furthering the Kingdom.